image goes here
Malmesbury is the oldest borough in England, a status granted by Alfred the Great in AD 880. Long before Alfred there was a 7th-century castle and monastery here on a hill overlooking the River Avon. The Saxon abbey became a famous centre of scholarship and learning. Aethelstan, the first King of All England defeated an army of Scots to claim that title and did so with the help of many men from Malmesbury. As a result, he granted the status Freeman of Malmesbury to a number of them, to be passed down from father to son or son in law. Along with the title, this band of just 280 members, sometimes called "the most exclusive club in the world", title to 600 hides of land south of the town was shared. A "hide" of land was the area considered adequate to support a family at the time. It is rougly equivalent to 30 modern acres. Much of that original 1800 acre gift is still farm land, although the connection between modern freemen and those who actually fought with Aethelstan may be less clear, the spirit is still there. It is fascinating to talk over this and other aspects of history with farmers when we visit Malmesbury to provide:&ltbr />&ltbr /&gtWith historic buildings in and around the town, some national monuments, some still in use, owned privately or by the local council, we often find ourselves called on in the Malmesbury area to ensure that when the grime from traffic, bird fouling, general day to day soiling or even graffiti is removed from a treasured building, there is no damage to the often delicate stonework beneath.&ltbr />&ltbr /&gtFrom removal of old paint for a domestic redecoration project, or the intricate cleaning of stone work in a cathedral using the poultice method, you will find that wherever you are in Malmesbury or Wiltshire, you will get a quick response, highly competitive quotation and thorough cleaning from DJ Cooper. Our number is shown above, or if you prefer to send us an email, simply click in the header of any page.

Photo from Featured Project near Malmesbury, Wiltshire
The ThermaTech Superheated Steam Cleaning Process
For the gentle removal of Flexible Paints, Graffiti, Algae, Moss and more&ltbr />&ltbr /&gtThe ThermaTech System is unique in achieving temperatures up to 150 degrees at the nozzle end â making it a superheated water system. Designed and developed to effectively remove paint, biological matter and general dirt and grime without causing harm or shock to the substrate.&ltbr />&ltbr /&gtWhat can ThermaTech be used for?&ltbr />&ltbr /&gtThe steam/superheated water will remove paint, moss, algae, fungi and other biological matter and will also kill off spores. This means there is then no need to use a chemical biocide during the removal process or as a protection against further biological activity.&ltbr />&ltbr /&gtHow does it work?&ltbr />&ltbr /&gtThermaTech cleans stonework and masonry using high-temperature steam. Whilst the temperature in the system is high, the pressure on the surface being cleaned is very gentle and the volume of water is low. The surface is therefore not saturated and will be dry within minutes.&ltbr />&ltbr /&gtWith absolutly 0% surface damage.&ltbr />&ltbr /&gtWe recommend the ThermaTech for use on surfaces such as brick, stone, concrete, tiled (glazed and encaustic), wood, faience and terracotta. It is a useful sterilisation tool for kitchens, toilets, swimming pools, hospitals and factories. 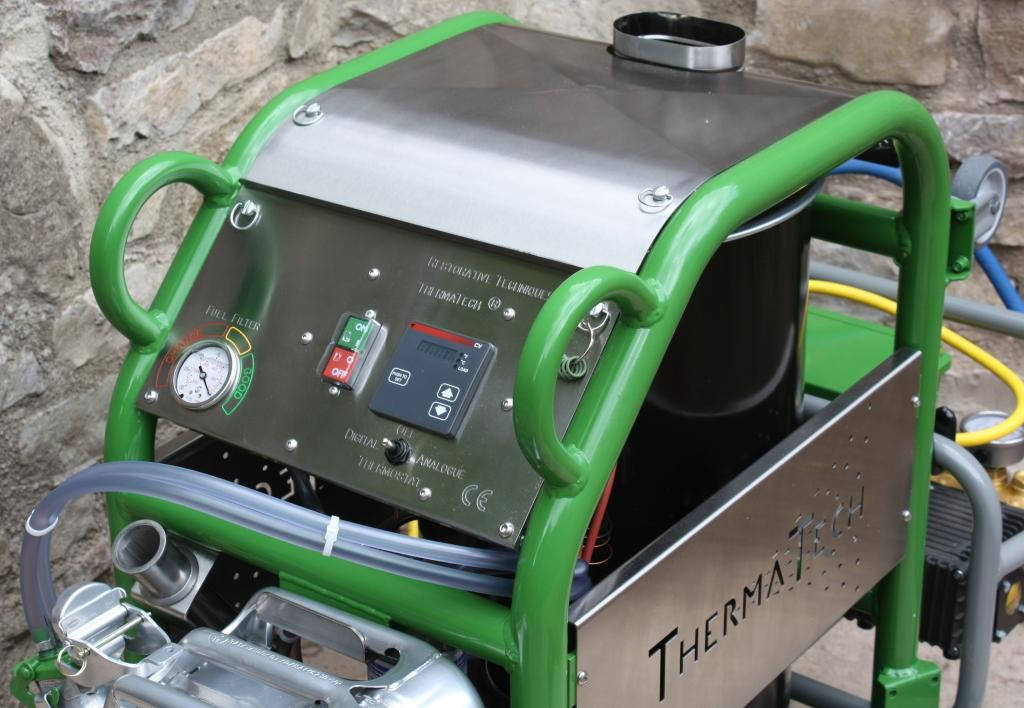