image goes here
Somerton is said to have given its name to the county of Somerset. It was certainly one of the main residences of the Saxon kings who built a castle here. The town was razed by Vikings in 877, but was soon rebuilt and became the largest and best defended in the area. Somerton was the stronghold of King Alfred the Great, and has had many connections with royalty throughout the ages. It is listed in the Domesday Book as the property of William the Conqueror and was the first manor to be listed in the survey of Somerset. At this time it was recorded as having fisheries and 500 sheep. Since then, the number of sheep in surrounding farms has grown greatly, as has the number of dairy cattle. Soerton is a beautiful town with easy access, so it is always a pleasure to come here when local dairy farmers call on us for:&ltbr />&ltbr /&gtWith historic buildings in and around the town, some national monuments, some still in use, owned privately or by the local council, we often find ourselves called on in the Somerton area to ensure that when the grime from traffic, bird fouling, general day to day soiling or even graffiti is removed from a treasured building, there is no damage to the often delicate stonework beneath.&ltbr />&ltbr /&gtFrom removal of old paint for a domestic redecoration project, or the intricate cleaning of stone work in a cathedral using the poultice method, you will find that wherever you are in Somerton or Somerset, you will get a quick response, highly competitive quotation and thorough cleaning from DJ Cooper. Our number is shown above, or if you prefer to send us an email, simply click in the header of any page. 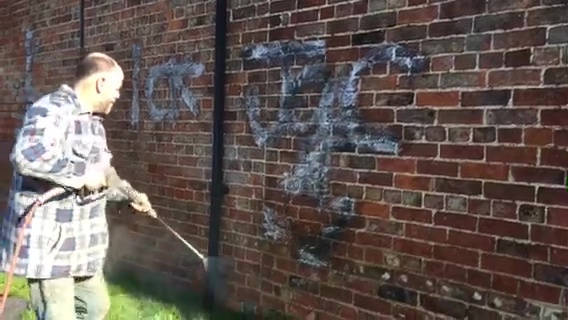